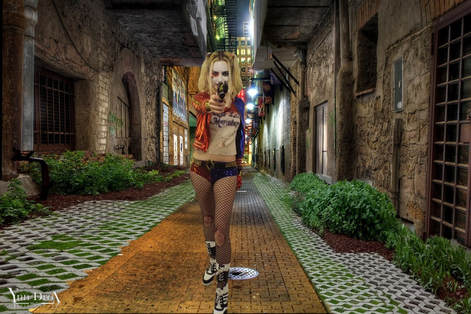 Jax Bayne​
In the early spring in 1990 somewhere in Santa Cruz, California a little girl named Jax was born to a Cuban refugee and a teacher. Growing up she enjoyed sketching as she contemplated being a fashion or costume designer. Her other hobbies didn’t stay very far this future dream as also enjoyed performing arts, writing, and a variety of arts and crafts.

Now that she is older she have gained an interest in cognitive neuropsychology, psychology, linguistics, philosophy, and religion.  However she still has not given up on her dreams in the arts. She believes that “that there is a lot of possibility for research that could be life changing when implemented in clinical testing settings”. However, despite the growing years she has still help on her dreams in the arts. Among her goals is to publish her writings, selling her model prints, getting more involved with game streaming, comics, acting, and cosplaying.

As fickle as a child’s heart can be Jax has never given up on her dream of fashion and costume designing. What has kept her so focused is was has been inspiring her though her years.
“I enjoy creative escapism of all forms & have always desired to be someone other than me due to a lot of personal health difficulties, both psychological & physiological, so I’ve enjoyed dressing up and cosplay acting ever since I was small.

I also got stage fright during puberty & stopped any form of performance art for over a decade. I started modeling less than a year ago to push myself to confront my fear. It’s still difficult each time, but I’m always happy I pushed myself afterwards.”
So dedicated is she to cosplaying that her once natural brunette hair has been dyed blonde to more easily fake other colors for different cosplay so she doesn’t have to a wig. She is even trying to get better at wearing different colored contact. Though standing at five feet nine inches and having a healthy weight at over a hundred pounds cosplay, by nature, is not a overly judgmental art as compared to other fashion industries. Indeed terms such as ‘gender bend’ and ‘cross over’ and common terms when admiring the art such cosplayers have put so much time and effort into. A particular cosplay of choice for Jax is Harley Quinn. However, this does not mean this is the only options she is willing to cosplay. Thriller and horror themes have been theme she has considered for some time now. Even when asked for what D&D character she would be she replied that she would be a neutral good elf cleric.

Her life hasn’t been just costumes and make up. At the start of 2011 she was initiated into the Hindu faith. A moment in her life that she looks back on with immense fortune. Even living her life by a saying found in the main teachings of this practice. “Be humbler than a blade of grass, more tolerant than a tree, and giving respect to all without expecting any in return.” She considers this positive and harmonious advice for anyone regardless what religion or spirituality they are or even if they aren’t. Regardless if it would be possible or not she sees living a monastic life in Nabadwip, the holiest place of pilgrimage in her spiritual tradition, a way she would enjoy the remainder of her days. Such experience could possible only be enhanced having a pet cat as it is her favorite animal due to their furriness and low maintenance. Though if it was possible she might go with a pet griffin too.

We at YnnDrox Media enjoyed getting to know Jax, and we hope that you enjoyed getting to know her a little bit more. Her experience with us was one she described as “Super fun! I felt comfortable & respected the whole time. The conversation was super engaging which helped put me at ease, and the level of attention and interest in me as a model is totally above and beyond, which is immensely appreciated!” From our own experience and from what you have read it is clear that she is someone who is more than just a face behind a costume. This has been Mark Clements from YnnDrox Media giving you the behind the costume look on Jax Bayne. 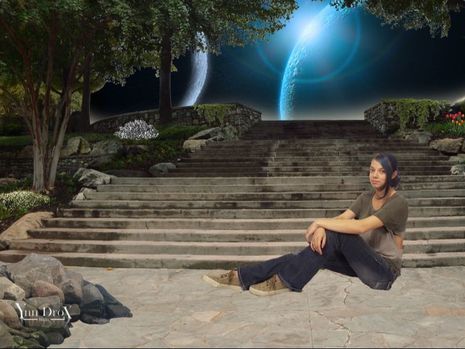 Alyesia Loch
Life is different for everyone. Meganne and Timothy Loch are no different. While Meganne may be General Manager at a Rite Aid and Timothy stays at home, what makes them even more unique is that they are the parents to Alyesia Loch. Born with Hazel eyes in the summer of 1988 in the mountains of Salt Lake City, Utah she has common habit changing her hair. Today it is a brilliant blend of blue and purple. Tomorrow it might be black and blue. A month from now it may be a rich deep green. One thing that can be said about her is that is not afraid to express herself.

Indeed this is what inspires her about modeling. It is her chance to express herself as an individual. More importantly modeling gives her the opportunity to love who she is and learn to love or be comfortable with her own body. In doing so she is living up a motto that she lives by. “The only reason boats ever sink is because they let the water around them get in” This has kept he confident by reminding her not to be affected by negative people and what they say by choosing not let their words inside her heart to sink her. This manner of self-control may have been instilled in her at an early at an early age when she took karate as her old instructor Sensei Tony has been an inspiration figure in her life the has always been then for her when she had no one else.

Having a karate instructor as an inspirational figure in her life may have been why she wanted to be a karate teacher when she was younger. That or a horse back rider, but what young girl doesn’t have some fondness for horse? Then again who doesn’t have some fondness for horses? Now that she is older her goals have changed to mainly furthering her path in modeling, but also becoming a detective.

When asked how she would life out her life she described a life that was on the cliffs in Oregon with two dogs, a good job, and enjoying life whether she was married or not. However, as peaceful at this might sound she isn’t by any means a boring. Given the chance she would also have a pet dragon just so it could shoot fire at people who displeased her. With that said, pet dragons don’t seem to be only why she would be affiliated with the fire breathers. As a D&D character she just might play as chaotic neutral Dragonborn with black dragon heritage. This means that she could spit a line of acid as an attack. Her background would be an Acolyte with skills in athletics, animal handling, and knowledgeable of both celestial and elvish languages. Her holy symbol would also be Emblem. For those who don’t know what all this means then then picture a large reptilian creature caring a great axe who is looking for looking for no good to entertain herself.
​
We at YnnDrox Media enjoyed getting to know Alyesia, and we hope that you enjoyed getting to know her a little bit more. From our own experience and from what you have read it is clear that she is a girl packs a punch and is on the case to get what she wants out of life. This has been Mark Clements from YnnDrox Media giving you the behind the costume look on Alyesia Loch